Never has an ECB meeting been so eagerly anticipated, and yet so confused:

There was an important step between 3 and 4, however, and that was the impact of the Bank of Japan moving into negative rates, as well as the ongoing cumulative bout of fear subsuming the markets. In February, we all decided that lower interest rates might not actually be very good for the banking system. Which is a bit of a shame, given that the banks are the transmission mechanism by which those super-stimulative rates are supposed to super-stimulate the economy. This now leaves us in this position:

You can see how the price action just petered out after January, here’s the 4th Euribor contract and EUR/USD:

You can see how the Euro even started to rally into the middle of February, when risk aversion was at its height, even as fears over the European banking system were also at their height. Confused? You should be. Everyone is.

Lower rates for longer were supposed to be a Good Thing. When it came to the ECB specifically, it worked like a charm: everyone jumped onto the ECB QE trade a year ago, buying risky European assets, and then hedging the currency, delivering SuperMario’s dream of higher stock markets but a lower currency. Yet another dream now turns to a nightmare. The ECB now have to square the circle of delivering more stimulus, but not damaging the banking sector while they do it. Instead of “whatever it takes” to save the Euro, the focus now is on “However it takes”. This leaves the market in quite a pickle. Gone are the days where it was just the case of delivering a surprise 25bp rate cut to cause a re-pricing lower of interest rates and your currency – although note that the RBNZ overnight managed to do just this, with the NZD down almost 2.5% against the USD at the time of writing. No, we are left with a much more complicated outlook for the ECB today. Key questions for them to answer:

Blondemoney could bore you with the minutiae of all of this. We could discuss what’s priced, and what’s expected, but the truth is, after these past 3 meetings, no-one knows what to expect, nor how much risk to take to avoid losses or stand any chance of making money. The EUR/USD options market was trading yesterday with an overnight vol of 33%, equivalent to a break-even of 1.4% on the currency. The NZD/USD market was the same, and we just got a move of almost twice that, so although it seems high, it might not be high enough.

At this point, the impetus for every market might not lie in the currency or interest rates at all, despite the fact that interest rate decisions are usually most linked with those markets. No, the real question is what happens to European banking stocks. They were going their merry own way until the start of this year, when of course stock markets more broadly came under pressure, but then financials specifically started to accelerate lower and as yet have failed to make up the ground. Here’s the SX7E banking sub-index versus the main Eurostoxx SX5E: 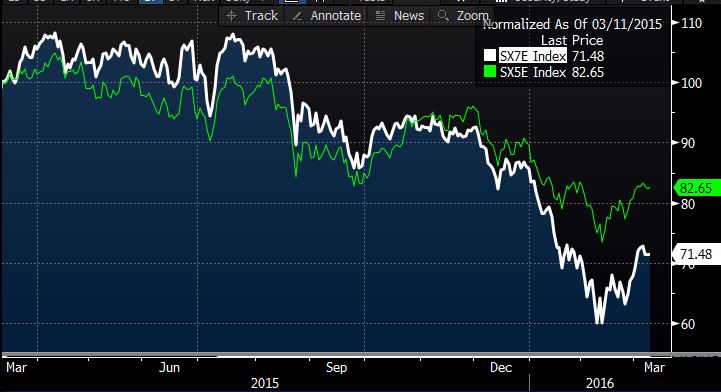 If Draghi can design a dastardly enough easing programme, then he might just be able to close that gap while also keeping rates and the currency down. Remember at this meeting that the famous Bundesbank hawk, Jens Weidmann, doesn’t actually get a vote, due to the new rotating voting system on the ECB (ah the impact of EU enlargement!). Draghi will be weighing heavily on this chart of core inflation to force the ECB to deliver, given that it has plunged back down to the levels of last April:

That’s because 5y5y inflation expectations have also struggled to bounce, and in fact have only spiked recently due to expectations about today’s meeting (at least in part): 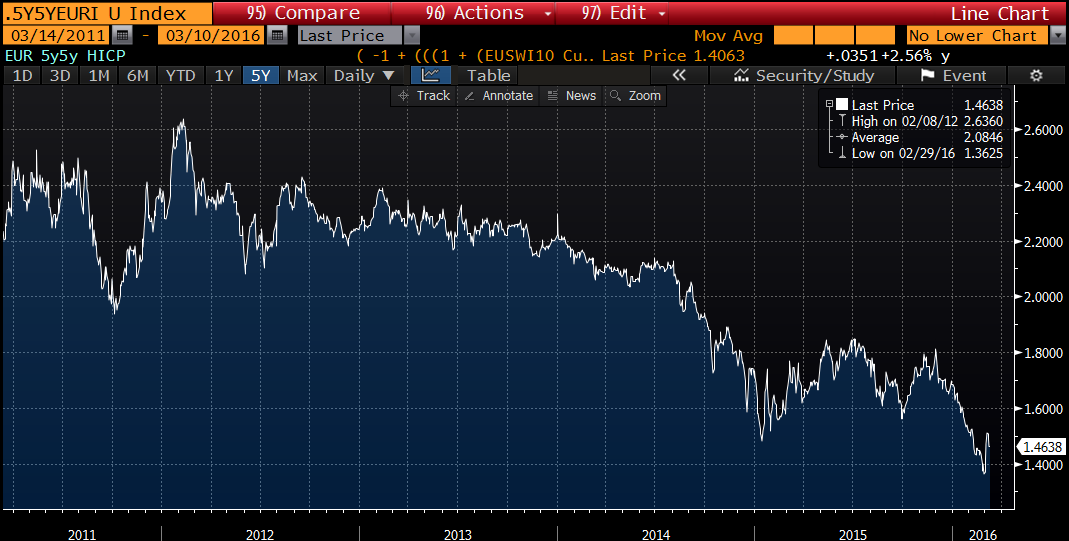 It’s a fiendishly difficult puzzle. Can he convince us that he is the man to solve it, “however it takes”??

[Blondemoney is an optimist, so thinks on balance that Yes, He Can. That would provide fuel to the recent risk rally fire, and keep it going until someone notices that the 30yr JGB market has broken. But that’s a story for another time. Sleep now. Draghi is here. Shhhh….]