And so, we move from Pinter to Marlowe. The lowflation low-growth world in which we now live has created a dreadful Faustian Pact between governments and central banks. It could not have been any other way, without anarchy (although Trump / Brexit / coup attempts suggest we’re not far from that). The banking crisis led to a transfer of massive liabilities from the private sector to the sovereign, and then central bank intervention was required to prop this debt up. It may yet work. But the massive collapse in the oil price and anaemic consumer demand have conspired to a feeble recovery thus far. Or at least feeble enough that we now have G4 central banks with balance sheets that have ballooned like this: 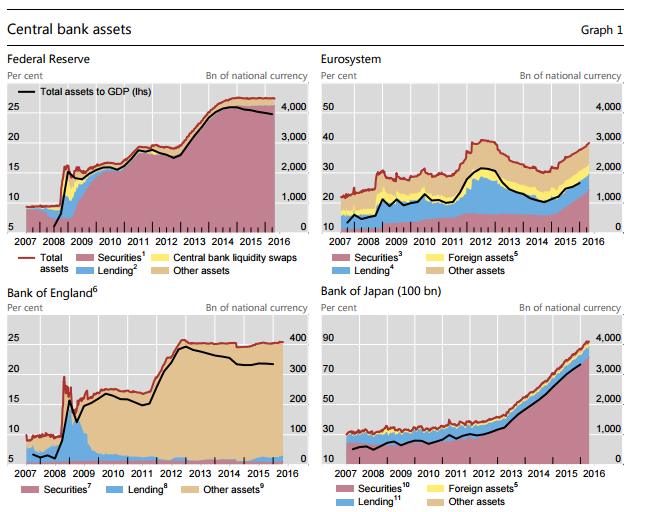 Given that this action has been taken over the past 8 years and, one Fed rate hike notwithstanding, continues apace, it’s no wonder the BIS have issued a new paper that includes this chart, entitled, in classic understated fashion, “Unconventional monetary policies: a re-appraisal“. It is worth reading the full 34 pages, but Blondemoney is of course here to save you time, so here’s the key points:

1. OK, so these unconventional methods have worked

The BIS try to be balanced in this paper, even as almost every conclusion points to a massive red flag about ever-more permanent unconventional policy. They could have just shouted “warning warning, this is getting out of hand guys”, but the institution is in neutral Switzerland, after all.  They start with some lovely summaries of what action has been taken so far (and this document should be saved by economics and history students everywhere as a reference guide): 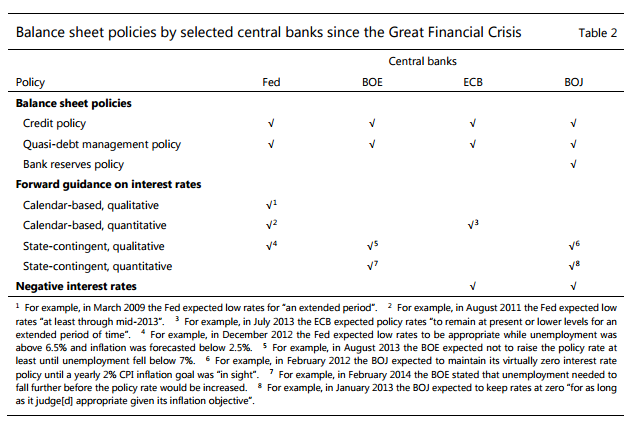 They note: ‘on balance, unconventional monetary policies have succeeded in influencing financial conditions, probably beyond original expectations. Their effectiveness may vary across instruments and circumstances, but their impact is beyond doubt. The behaviour of government bond yields is the most telling example’

2. But they’re not without their issues

This is the meat of their paper, and they run through various of these issues…

– Yes, it’s not just about how long they’re in place, it is about how to ever get out of them

– It causes potential problems for central bank credibility, or as they put it ‘reputational capital‘

3. Negative rates, are you serious??

It is worth quoting them in full:

‘Their transmission to bank rates, by contrast, has proved more problematic. In particular, such rates have only been partially transmitted to wholesale deposit rates and so far not at all to retail deposits. Ostensibly, banks are reluctant to do so, presumably out of concerns with the reaction of depositors. Moreover, at least in one case (Switzerland), banks have actually responded by raising their mortgage rates, in all probability in order to preserve their profitability and facilitated by high concentration among lenders.

.. This points to the limits of the strategy as a means of boosting financial conditions through the banking system. If policy rates do not transmit to lending rates, they cannot boost the demand for loans. If they do transmit to lower lending rates but not to deposit rates, they squeeze banks’ profits, over time possibly undermining their willingness and ability to lend. And if they transmit to both lending and deposit rates, they risk unsettling the deposit base, making it harder for banks to attract funds.’

And oh yes what actually ends up happening is that you trash your exchange rate, leading to currency wars globally:

‘This leaves exchange rate depreciation and, possibly, direct borrowing from capital markets as the main channels through which negative rates can ease financial conditions’….

‘ it suggests that, over time, as the power of the measures through domestic channels diminishes, policy may end up de facto relying more on exchange rate depreciation – not necessarily by design, but simply by default. This appears to have happened. It is no coincidence, perhaps, that exchange rates have been increasingly prominent in central bank statements’

‘ it also suggests that, over time, the balance between the benefits and costs of the measures deteriorates. The effectiveness tends to diminish, especially as the policy room for manoeuvre narrows. And any side-effects tend to grow – on the profitability and resilience of the financial system, on risk-taking in financial markets and on the global balance of policies (eg Borio (2014a), Borio and Disyatat (2014)). Ultimately, this may undermine the credibility of central banks’

Did you hear that? Over time, it gets worse. These policies become less effective and box central banks into a corner. The financial system becomes less robust as banks become less profitable and people take more and more risk. And then, in the end game, no one believes central banks any more so they are completely powerless. This really is the BIS pointing out that the Emperor has No Clothes.

‘The market turbulence in February 2016, seemingly exacerbated in part by a loss of confidence in central banks’ powers, highlights the dilemmas involved (BIS (2016b)). Markets’ dependence on central bank support is hard to shake off (eg El-Erian (2016)). And even short of such loss of confidence and credibility, the narrowing room for policy manoeuvre would make it harder to address the next recession, whenever it arises, unless central banks manage to “reload the gun” ahead of time’

Back to anarchy. All of these unconventional measures are boosting the 1% at the top, at the expense of those at the bottom. There is a straight line from 8 years of unconventional policy and the UK’s vote to leave the EU / Greece’s election of Tsipras / Donald Trump.

‘This illustration highlights the communication challenges central banks face. The direct impact of policy on asset prices, especially equities, is quite visible. And if one focuses on the richest (eg, the top 1 per cent) and poorest segments of the population, it is hard to argue that policy does not raise wealth inequality. The defence has to rely on the argument that policy is sufficiently effective in boosting output and employment – a key source of income and, over time, wealth (eg Bernanke (2015), Mersch (2014)). But, regardless of its merits, it is politically difficult to counter an argument based on immediate observation with one based on a counterfactual.’

Again, their wording is deliberately understated. But what they are saying here is that central banks are wandering into government territory and risking their independence – which, once lost, can be very hard to win back. So these political problems are going to grow, until we move back to a more normal state of affairs.

We cannot say we weren’t warned:

‘We have argued that this development is a risky one. Unconventional monetary policy measures, in our view, are likely to be subject to diminishing returns. The balance between benefits and costs tends to worsen the longer they stay in place. Exit difficulties and political economy problems loom large. Short-term gain may well give way to longer-term pain. As the central bank’s policy room for manoeuvre narrows, so does its ability to deal with the next recession, which will inevitably come. The overall pressure to rely on increasingly experimental, at best highly unpredictable, at worst dangerous, measures may at some point become too strong. Ultimately, central banks’ credibility and legitimacy could come into question’

So, have a nice relaxing summer. Worry about the occasional flash crash and then worry you’re not invested enough in the rally afterwards. But coming up over the horizon is a much bigger issue. The central bank of the world’s central banks just told you that.

You’re ignorant. The rate-of-change in money flows (our means-of-payment money times its velocity of circulation), contracted from 1/1/2013 until 1/1/2016. And this forced up the $, and
forced down oil.

Low rates are due to low money velocity. Low Vt in turn is due to impounding $9 trillion of savings within the CB system (remunerating reserves exacerbated this problem). Unless savings are expeditiously activated, i.e., “put to work”, the impact will be deflationary. And since the 300 Ph.Ds. on the Fed’s technical staff don’t know the differences between money and liquid assets our economy will flat-line.

I don’t disagree with the low velocity of money. So how is that ever going to change?

Why should Reserve Banks be independent? It is only in the last thirty or so years they have been. Those powers they now exercise were once the political powers that no Government could escape from. The people just voted them out. My view, and I know it is a conspiracy theory, is that giving the RBs independence is part of a grand design for World Government. It has allowed Governments to not accept responsibility for the economy of their country. There is nothing magical about economics. It is a man made structure that can be unmade. I find it interesting that the language used in an economics paper is designed to confuse people and make them think it is too clever for them to understand. A bit like in the olden days when the catholic priest took mass in Latin or when the lawyers spoke in Latin terminology.

So do you think central banks should stop being independent? In the 1980s in the UK, the Chancellor of the Exchequer set interest rates. Should we go back to that? At least, as you say, the public can push them out of office if they disagree with their policies!