Zut alors, just 3 days to go until St George’s Day! Oh and the first round of the French election. You’d be forgiven for thinking the market had already heaved a gallic style shrug over this pathetique little event risk, and that deciding in which pub to partake of your patriotic pint was the key consideration of the weekend. Just look at how overnight vols have subsided over the past couple of months [kindly provided by @JeremyWS on Twitter]: 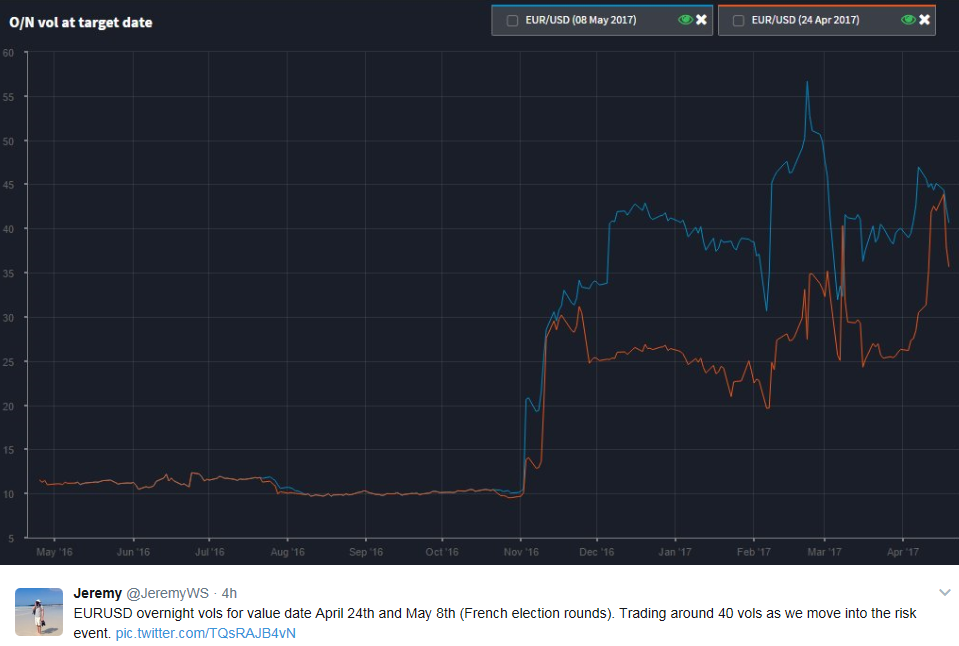 So the volatility expected in EUR/USD over the night of the 1st and 2nd round of the French elections is around 40% and 35% respectively. Ahead of Brexit, GBP/USD equivalent volatility was more like 150%; for the US election in EUR/USD more like 100%. Either way, the point is clear: we may be expecting some market movement, but nowhere near as much as we saw last year.

This has largely coincided with the surge in the polls by “market friendly” Macron (and even the resurgence of Fillon). The narrative thus far is that someone the market likes will make it through to the final round, and then he will go and win that one too. Nothing to see here, please move along. In fact, haven’t those political risk events from last year also determined that any kind of crash in risky assets is over in but a flash – so if anything, you’d want to be ready to sell vol / buy carry / wear diamonds?

This explains why the absolute level of vols has fallen from the highs. But more interesting is the relationship between the two lines – expected volatility for the two rounds of the election has converged. In other words, the outcome of the 1st round is expected to be as volatile as the outcome of the final round. Which is instinctively odd, given that it’s only whoever wins the 2nd round who actually counts. But this has occurred because the 1st round has become so unpredictable: 4 candidates now have a similar chance of making it through, with each polling around 20-25% [chart courtesy of @GoodwinMJ]: 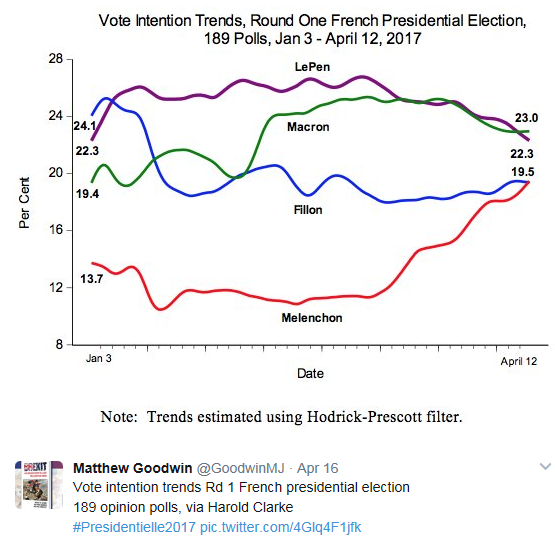 The reasons for this convergence in the past month?
Firstly, Fillon staunched the bleeding. If you’re going to have a scandal come out, get it all out early. Secondly, Le Pen’s campaign has been lacklustre, with headlines stolen by the new kid on the block, Macron. And then finally, the joker in the pack: the far-left candidate Jean-Luc Melenchon has staged a last minute rally, throwing predictions for the winners of the 1st round up into the air. Why has he done so well? It would appear that some left-wing voters aren’t happy to sign up to pseudo-Blairite Macron’s bourgeois centrist platform. In effect, the Melenchon surge has occurred precisely because the market’s favourite, Monsieur Macron, has been doing so well. If you want to be complacent, you could say that if it’s a sign of Macron’s strength, then it’s even more likely he will win the whole thing: in other words, a sign that we really will get the market-friendly outcome.

So you check the polls again, relax, and sit back and wait to buy the dip.

CLANG!
There goes the first warning bell: we know the polls have been flawed in recent years. Across the world. And largely because we are now experiencing a significant redrawing of political landscapes as The People vent Their Frustration with The Man, what with that whole financial crisis/austerity/low wages/tech revolution thing going on. Polls frequently work by drawing conclusions off baseline scenarios. But what’s the baseline for now?

OK, you say, but in the absence of anything else, it’s the best we’ve got. And the polls give a quantitative number. You need numbers for probabilities. So, you run the polls for the 1stround, then poll people again given various 2nd round options…

CLANG!!
Second warning bell: So, the 1st round has become incredibly predictable, with each candidate polling at a similar level. How do we now re-distribute voters into the 2nd round? If left-wing voters are choosing Melenchon over Macron now, will they choose Macron in a 2ndround just two weeks later? Would Macron rank over Le Pen? Will they turn out to vote at all?

CLANG!!!
Third warning bell (goodness this is getting noisy): If the second round is indeed Marine Le Pen vs Emmanuel Macron that’s a party that’s never held much public office vs a party that’s never even existed. So how would you vote, Monsieur Socialiste? Ok maybe you’ll look at their policies. Here’s a nice wrap from Bloomberg Politics: 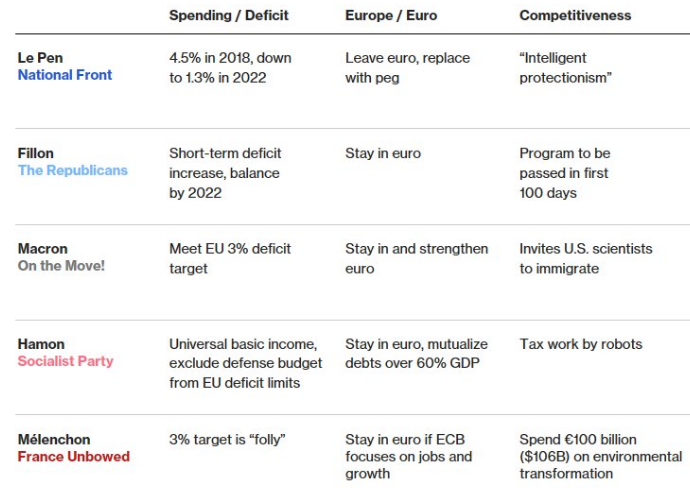 So does the alleged “right wing” Fillon voter turn to Macron in the 2nd round even though he wants to meet the EU’s deficit target? Or does that voter fear even more austerity, preferring to plump for the fiscal largesse of Marine?

If anything, the four-way split in the polls just goes to show how incredibly unpredictable this French election is. Two of those four candidates want to force a significant new relationship between France and the EU. That’s a 50% chance that we get someone in the second round who would be incredibly disruptive to European assets. That suggests a 25% chance we end up with that in the final round too. And in just four days’ time, that probability could double to 50% if Melenchon or Le Pen get through. Let’s not forget that Donald Trump was only polling at 36% on the actual day of the US election.

But couldn’t we also easily believe that a failure to deliver a “market friendly” candidate in an election in one of the founding members of the EU will cause a fundamental re-think of whether to hold European assets? And that the probability of that happening is not zero, nor 1 in 4, but potentially evens at 50-50?

Looks like we will need that pint on Sunday…