Spring has well and truly sprung, though many currently feel more like they’re being continually pronged by a wayward mattress spring. It has certainly been a tricky few weeks, with stocks and fixed income rallying, and volatility plunging. On March 15th, when the Fed hiked rates for the second time in just 4 months, weren’t we supposed to be on the brink of a brave new era? A “proper” hiking cycle? Inflation back, baby, and you better believe it? Now instead we find ourselves well and truly stuck back to the future, with the dominant narrative being that Carry is King. Climb that wall of worry: buy stocks, buy bonds, sell vol, and keep on picking up the pennies in front of the steamroller.

As the VIX heads to the lows of the year, Bloomberg ran an article flagging up the explosion of interest in sell-vol strategies:

With this as the backdrop, we are once again in the virtuous loop that takes stockmarkets to within a percent or two of their highs of the year, and encourages inflows into bonds. Anywhere, anything with some yield will do. After all, even with that Fed rate increase, global yields are still ridiculously low. Money has to be put to work. But oh, that article from BBRG also flags up that there is still a short base in the US Tsy markets, at least as far as the IMM positions are concerned. This is despite the fact that there was a record cutting back of this position in the 10yr in March:

So let’s get this straight. Into the end of the quarter, specs were moved to massively trim their short 10y exposure, but increase their short in the front end? Sure, there is some rationale to this, if we believe the Fed are hiking in the near term, but we are not convinced the US economy is robust enough to deliver lots more hikes in the future.

You’re sitting there re-reading that paragraph, mulling it over in your mind. You’re wondering if there is indeed enough momentum in the US economy. You’re wondering what Janet Yellen might do, the crazy old dovish hiker.

This is where we need to stop.

That was the old world. This is the new one. In less than a year, Yellen is likely gone. Ahead of that, the new President has several Fed Board places to fill (another one now that we hear Lacker “accidentally” revealed market-sensitive info to Medley Global Advisers (Charlotte Hogg is probably as astonished as the rest of us that this isn’t front page news)). Separate to that, the President is cracking on with his agenda, throwing around new visa rules that prevent IT behemoths from employing immigrants, while his Commerce Secretary writes in the FT that the US “has the lowest trade barriers and the largest trade deficit in the world”. He goes on:

‘This is why President Donald Trump has directed the US Department of Commerce to report back within 90 days with a comprehensive analysis of the economic realities and the fine details of America’s trade patterns. Once Mr Trump has that analysis, he will be able to take measured and rational action to correct any anomalies.’

Yes that’s right, he’s working on it now, and trade is something he can affect by executive order alone. The market is still figuring out how he can deliver tax reform now that the Obamacare Repeal imploded, but it’s so stuck on that, it has failed to spot what else is on the horizon. In fact, its eyes have glazed over, and it’s hit the shift+f9 buttons that tell it to keep on carrying, because that’s what worked for the past 7 years, right?

This inability to incorporate political risk is global. The market only ever put the chances of a Le Pen Presidency at around 35%, and the inexorable rise of charming Blairite debutante Macron has seen this fall back to less than 25%. The betting markets saw Macron catapult up to 70% probability of winning, with Le Pen barely registering as anything with which the market should bat an eyelid: 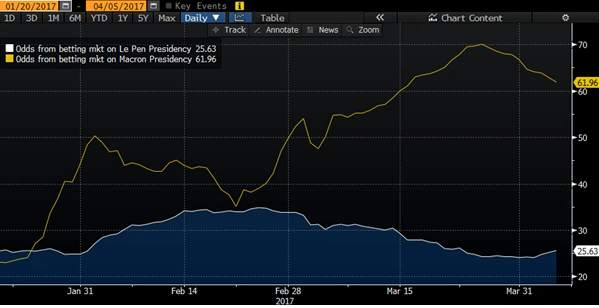 The EUR/USD risk reversal has concomitantly flipped back higher, with its extreme bid for Euro puts now registering as barely a flicker; less even than we were concerned with during the height of the sovereign debt crisis:

So the options market is now almost entirely ambivalent about the risk of France leaving the EU or the Euro, even though one of the two most likely second round candidates in its election in just 5 weeks’ time has both of those as a manifesto pledge? The Euro may have faced an existential crisis in 2011-12, but as we should now appreciate, it is by crisis that the politically-derived currency is forced closer together. Now, 6 years later, with an economy on its knees, a deeply unpopular President and a country unfortunately beset by several debilitating terrorist attacks, we think the French aren’t having their own existential crisis? Or at least that the risk of that is so small as to be unremarkable?

We are due a reality check. The tremors are there. The 13% sell off in the South African Rand over the past two weeks is more than enough to panic those trying to gain access to its 3 month yield of 9%. The Rand is always our bellwether for the insanity of the Keep On Carry Crew: they just got a nasty burn. Meanwhile, market fragility has nicely been shown up in the wobbles in the semi-pegged Czech Koruna ahead of their recent central bank meeting. The central bank’s commitment to keep the floor in place expired at the end of March, and ahead of its meeting on 30th March we saw a few punters try their luck at anticipating the removal of the floor. The CNB had no intention of doing anything, but the activity was enough to see volumes increase over 6x more than normal: 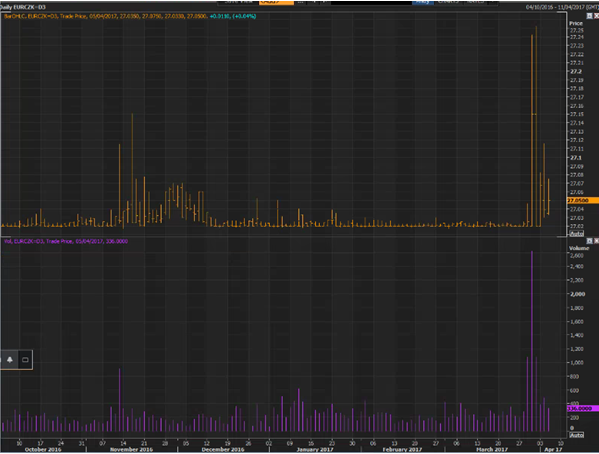 Well, maybe these can be written off as idiosyncratic, country-specific risks. We have seen enough flash crashes over the past few years not to worry, right?

But those happened without the backdrop of a reshaping of the global political order. They happened before central banks became an irrelevance. They happened when we could still try to plot the path for the global economy with some kind of certainty. Not when Britain chooses to leave the embrace of its largest trading bloc; or when a political novice becomes leader of the free world; or when France and Germany face existential elections for their heads of state.

So, one swallow does not a summer make. The summer is more likely beset by a market coming to terms with how fiscal policy works; what the Separation of Powers actually is; how trade negotiations take place; rather than its usual quantitative play off between risks of inflation and the risks of volatility.

Until then, carry on carrying the spring-time swallow.
.