“We now have Black Swan price action on the evidence of White Swans”.

Thus did we warn in the summer of 2018 why markets suddenly hit pockets of turbulence on what should already be priced in. Rumsfeld’s known unknowns are becoming unknown unknowns, whether it’s Trump attacking Iran, the UK leaving the EU without a clear plan, or anti-establishment forces winning elections across the board. We knew all of those things were not only possible, but likely. And yet markets respond only once the risk is a clear and present danger, rather than pricing in the increasing probability as information changes day by day.

This couldn’t be more clearly demonstrated than with the coronavirus.

Shutting down the factory of the world for even a week was always going to hurt supply chains; squeeze profit margins; and worry workers. In short, it would hit growth. The question was by how much and for how long; and whether any policy response could mitigate this risk.

Right now, we don’t know. We are learning more each day. But quarantining chunks of the population was only going to exacerbate the issues. More workers unable to get to work. More consumers not going to the shops. More fear.

Fear, of course, is famously hard to contain. Interest rate cuts or tax cuts are not an easy – or even useful – antidote. These classic economic stimulus measures can’t do much when trains are randomly stopped at borders over fears of the spread of the disease.

This is a new ball game for markets.

The price of an asset works like a pendulum. Negative news lurches the price downwards, but a positive impact pushes it back the other way. Markets used to move around as they found an equilibrium between these two forces.

Then along came QE. That meant the pendulum never swung into negative territory. A positive force was always pushing it higher. Over time, private money mimicked this momentum as it was the profitable path. The tracking mechanism inherent to ETFs provided the same positive impetus. This all added up to a floor on the pendulum, where eventually the price just stops moving very much at all.

In the past couple of years, we have seen what happens when this floor is removed, such as the Volmageddon of Feb 2018, or Fed QT and The Repo Squeeze. Then the pendulum is free to swing wildly.

So how do we know what force is acting on the pendulum? A good proxy is the gamma exposure in the S&P500 (monitored by our friend SqueezeMetrics as GEX).

Coronavirus has only concerned markets when there has been low gamma. That’s because the floor is gone. The negative impulse of fear is allowed to act upon the price. 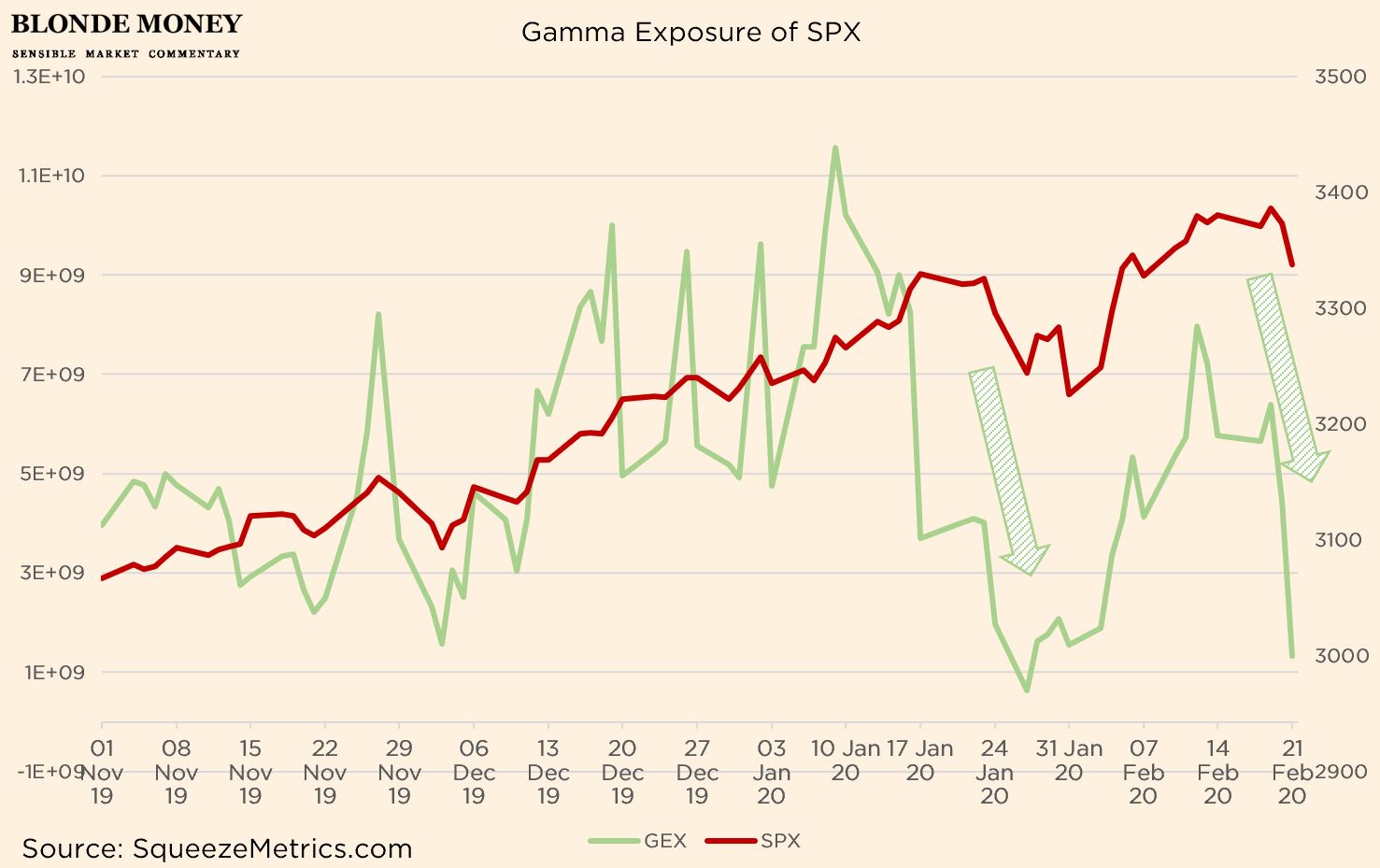 And now we are at the same juncture as the end of January, when gamma exposure plunged. Why is it the end of the month again? Well that’s because SPX options expire on the third Friday of the month.

So are we more frightened now because the price has fallen? Or did the price just fall because of the structure of the market?

If we follow the script from last time, this would be a great moment to buy the dip. But can we really do that when the evidence of a significant economic shock is rising?

Let’s go back to our pendulum.

For stock markets to rally once more, there would have to be a continuation of the three forces that drove prices to all-time highs in the first place:

We already expected the Fed to cut three times this year so 1) remains solid. Clarida has the chance to show his dovish stripes in his speech tomorrow. 3) won’t change until the fabric of ETFs unravels as their liquidity mismatch and discount to NAV becomes clear. So that leaves us with 2). And for this, we are concerned about reports that hedge funds and retail money have huge concentration risk. They’ve all piled into the same stocks, as this chart from Goldman shows: 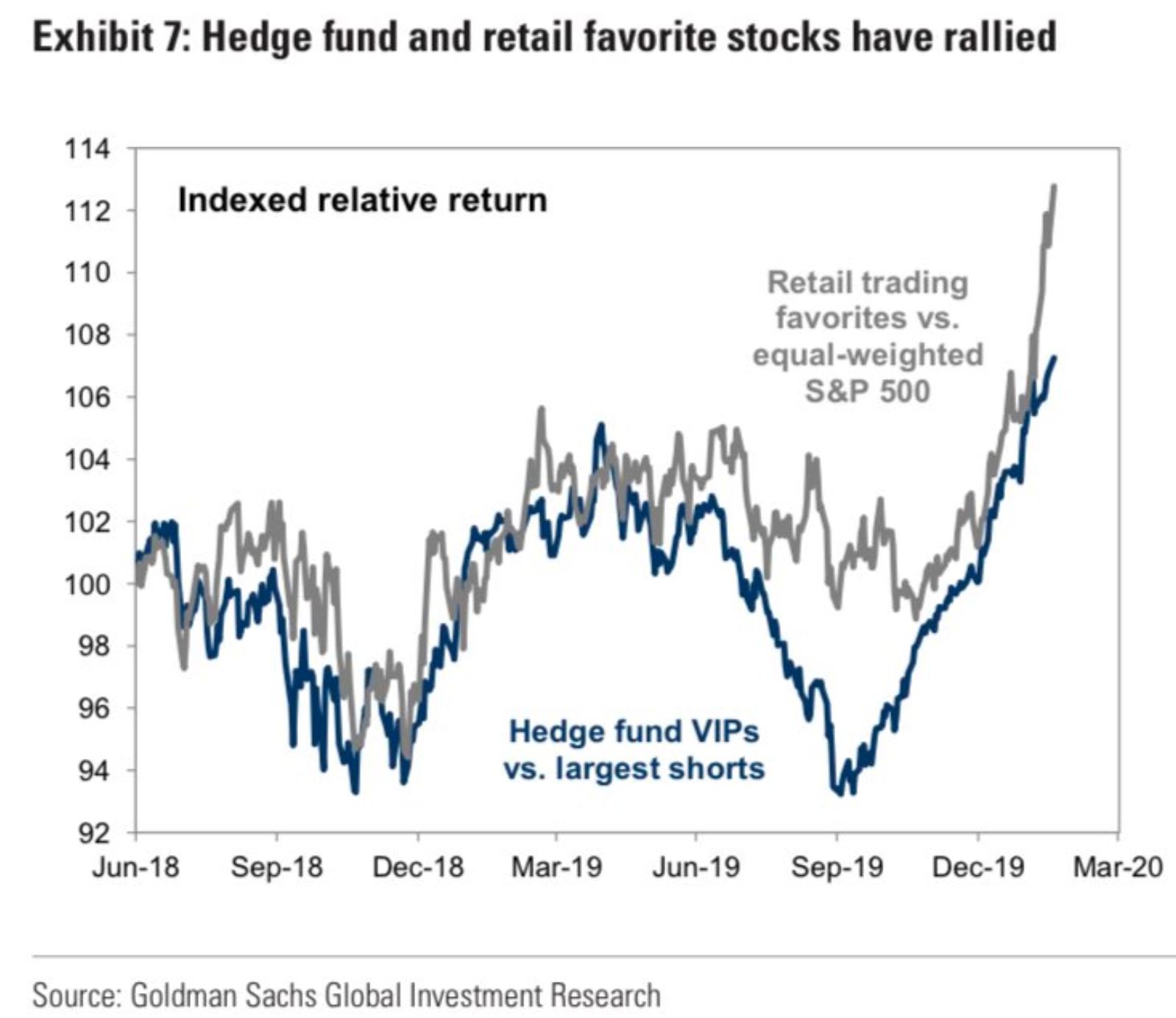 So if panic builds, everyone will be exiting the same stocks at the same time. A recipe for a significant correction, you might think.

Here’s another SqueezeMetrics chart which shows how his proxy for the VIX, known as GXV, spikes as SPX falls: 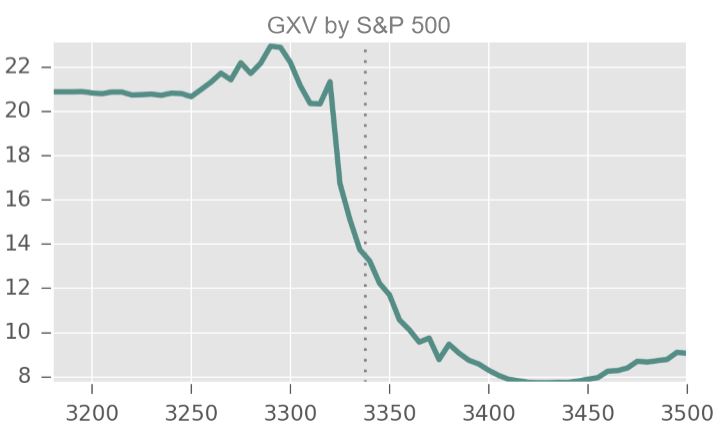 So the VIX index is around a relatively low 12 when the SPX is 3350, but it spikes to 20 around 3320. That’s incredibly steep. As we noted in “The Margin of Worry” a month ago, ‘a 1.5% move in the market is the difference between Armageddon and Euphoria’.

That margin is now even narrower. A 1% rally and everything will look rosy once again.

Is a 1% move in the S&P500 the difference between whether we should panic about the coronavirus or not? It shouldn’t be. But the system has become autocorrelated. Judgement about risk was unprofitable for years due to the wall of money pushing on the pendulum; there was no choice for discretionary traders but to join the forces pushing risky assets higher.

Judgement has been sacrificed on the altar of omniscient pricing. The price tells us what to think.

We believe the coronavirus will have a serious economic impact but that there will be a monetary and fiscal response. So, yes there will be market wobbles – but only when the gamma exposure in the market allows it.

Be prepared to feel schizophrenic as the white swans turn black.