We are well on the way to what we expected from our note last Friday. And we haven’t yet experienced extreme panic, either in financial markets or more widely from the general public. We are therefore extending our expectations for the months ahead:

How is this not panic?

The move has been so fast that people haven’t yet traded, either because they are too blindsided, or because they have been unable to do so. Just look at the volume bars underneath the S&P500 chart, nowhere near the highs of the financial crisis despite the market being much bigger now than it was then:

Currencies have been relatively well behaved. USD/MXN might have moved 8% on Thursday but it did that the evening Trump got elected. 24th August 2015 saw the biggest one day fall in NZD/JPY ever, of 11%, and that was simply after China devalued. Yes, interest rate differentials were bigger back then, but in a true dash for cash and demand for liquidity, currencies move.

Credit spreads are only at four-year highs. This even as equities demonstrate the potential downturn for earnings amidst a massive demand shock rippling through the global economy. 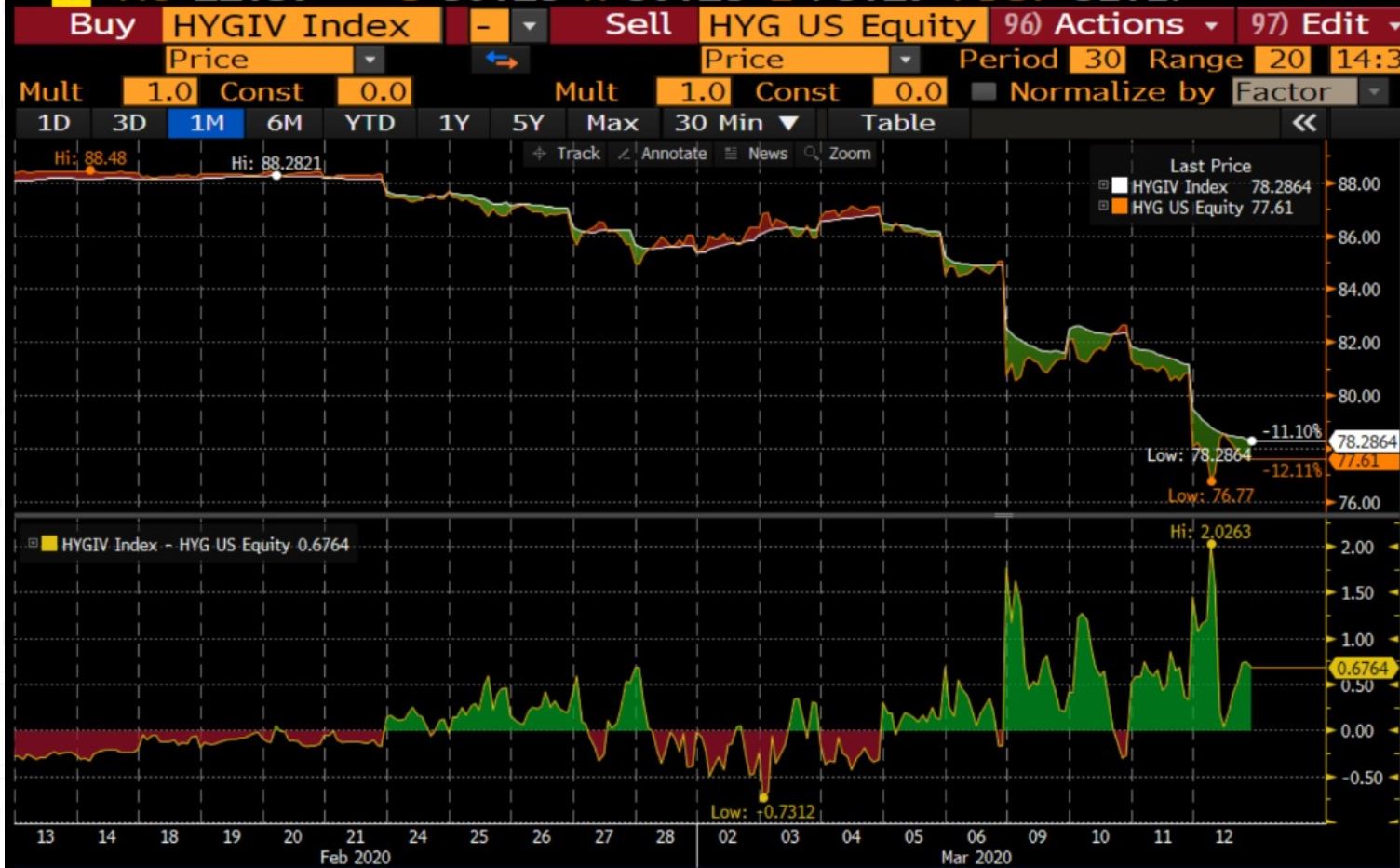 If anything, people have been buying. Bloomberg’s Eric Balchunas has categorised ETFs into those used by traders and those used by end investors. The latter continue to buy. 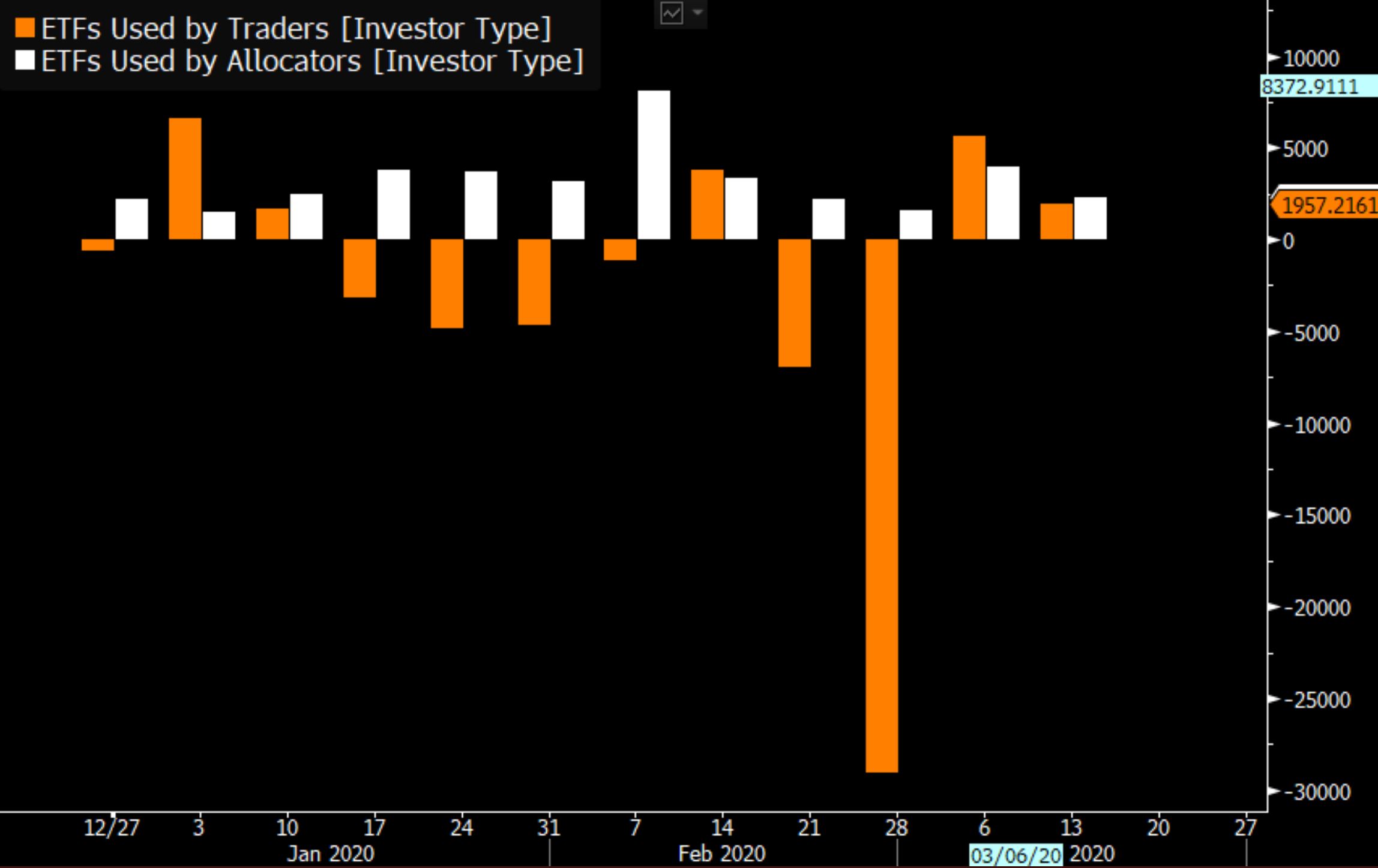 This is rabbit in the headlights stuff.

They will try to do something to mitigate this of course. Coordinated fiscal and monetary packages will increase in size. 100bp cut from the Fed next week is a done deal, along with what will feel a remarkable deployment of Eurozone fiscal resources. Lagarde’s comment that the ECB isn’t there to “close the spread” on government bonds of countries with poor debt dynamics like Italy doesn’t mean they won’t step in if the doom loop becomes systemic.

That will see momentary rallies in risk assets. But it won’t stop people’s fear of going out and spending, nor of people getting sick, nor of a lasting hit to confidence from the long shadow of anxiety. No policy can change that.

It also won’t stop the longer-term dynamics of economic nationalism. Supply chains will change. Governments will put their country first. As Mervyn King once said of the banks, they are global in life, but national in death. That shifts the long-term growth potential of the global economy.

After the September 11th terror attacks, markets shut for three trading days. The Athens stock exchange closed for five trading days during the sovereign debt crisis of 2015. So, there is precedent.

Now, however, markets are much more globally available. ETFs trade on markets other than their domestic locale, for example the S&P500 tracker that trades in Tokyo hours. It would require significant global cooperation to shut everything down.

But the markets are likely to shut of their own accord.

Market makers don’t have to make a market, and they won’t once they either sustain too great losses and/or are told to stop by risk managers. Note that for all the liquidity benefits paraded by ETFs because ‘they trade on an exchange’, exchange rules don’t mandate continuous pricing. For example on NYSE Arca, Rule 7.23-E only mandate prices must be 9.5% away from last best bid/offer, and this widens to 21.5% in the final half hour of trading.

If a market-maker fails to play by the rules, they can be fined. But that can be months later and for a derisory amount. (Here’s an example of a $55,000 fine issued almost a year after an infraction which itself lasted for four months).

In this scenario, Central banks have the power to become market-makers of last resort. In fact the BOE had an MMLR plan during the financial crisis, and they stepped in during the summer of 1914 as this BOE blog post explains.

But by that stage we will have entered the zone whereby everyone is panicking due to the lack of an outlet for the panic. There’s nothing worse than trying to liquidate assets when there is no means to do so.

That liquidation has only just begun.

Over 90% of the respondents to our note last week said that we were too bearish. During the week we have only heard of people wanting to buy or sitting on their hands to see what pans out.

But we know what is going to pan out. An economic recession which can’t be stopped.

And more importantly, we already know the behavioural response. We will panic. We already are.

But we are human and we are in the first stage of grief, which is denial. We try to spot a pattern or make a reference point. This is like 9/11, investors in airline stocks say. It’s like the Japanese tsunami and there will be a rebuild, say economists.

In this climate, it is impossible to put on a purely analytical hat and say things like, well we expect a Q2 hit to GDP growth of 1.6 percentage points which then reverses in the second half of the year; or indeed that the P/E ratio of stocks suggests 2,457 is fair value on the S&P500. This is visceral human emotion stuff combined with massive epidemiological uncertainty. You just need to think about how far the price of assets can fall when everything stops.

That level is a lot lower than here.