Fintech
Funds are flowing into fintech at an astonishing pace, see chart below. They are now becoming part of the establishment. The current boom sees the focus on the biggest players and Europe is catching up with America and China. Klarna, Swedish “buy now, pay later” startup is valued at $46bn, Revolut $33bn. It’s not just payment firms, “wealth-tech” that encompasses online brokers is also in vogue. The pandemic has sped up digitisation of commerce and finance. Fintech offerings are increasing, Stripe set up to accept payments online now offers other services including tax compliance. The hefty prices being paid has risks, for instance Visa is buying Tink at 60 times the startup’s annual revenue. Also, founders often leave once their “vesting” periods end, will these firms have the same level of innovation afterwards? 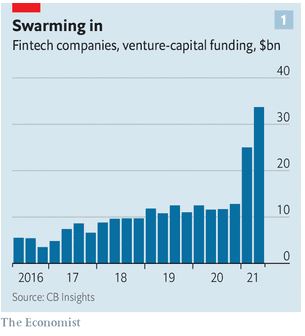 Wall Street
American banks have enjoyed massive profits, the big five had $39bn in Q2, five times Q2 2019 levels, see chart. Trading was not as frenetic as Q1 but deal-making at investment banks was robust, e.g. fees at JPMorgan rose 25% on the year. Also loan loss provisions have been revised as stimulus checks helped customers, JPMorgan released $3bn in provisions for instance. Consumers have healthy credit card habits, repayments remain high and spending is up 40% year-on-year. Will it continue? Investors seem less sure, JPMorgan and Goldman beat expectations but their share prices closed lower on the day they reported their earnings. 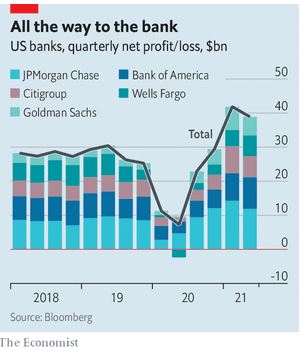 The European Central Bank
For 23 years the ECB had a fuzzy inflation target of “below, but close to, 2%”, but since 2013 euro area annual inflation has been just 0.9%, compared to America at 1.9%. Christine Lagarde launched a review of its strategy and on July 8th its conclusions were announced. They intend to incorporate the impact of climate change in its models; pay attention to the cost of housing (other rich countries already incorporate this); and a symmetric inflation target of 2% although this seems to mean different things to different people. Jens Weidmann of the Bundesbank said they would not exceed it, Olli Rehn of the Finnish central bank said he expected their response to be similar to the Fed’s, i.e. allow periods of overshooting to make up for previous shortfalls. The next meeting of the monetary policy committee should clarify what it means, as promised by Ms Lagarde.

Inflation in America and Britain
Consumer prices in America rose 5.4% and 2.5% in Britain, well above expectations. There are a small number of huge price rises, such as used cars, whereas the median price change is far lower. 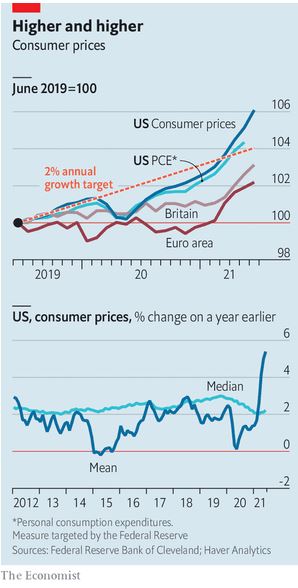 Welfare and work
America is reopening but firms are finding it hard to get staff. As a result many states are ending pandemic related unemployment insurance, not least the $300 weekly top-up in place since January. Even so, it’s hard to work out how much difference this makes. Most likely we will have to wait until September to get more meaningful data and overall employment should be higher. Many are living off savings they have accumulated because they don’t want to go back to their jobs; for instance, being a chef has the highest risk of dying of Covid-19 compared to almost any other occupation, according to research.

The IMF
The IMF has been heavily involved since the pandemic began. It has awarded loans of $130bn to 85 countries, but given it can lend $1trn they could have done more. On July 8th they did just that, creating $650bn in new foreign-exchange reserves. They will use SDRs, “special drawing rights” which is a quasi-currency valued against several major currencies. There are no conditions attached, no deadline to repay and governments pay 0.05% on SDRs they use. It will give governments latitude to use hard-currency reserves to import food or vaccines. Unfortunately low-income countries receive just 3.2% of the total, $21bn, but rich countries are looking to donate some of their SDRs.

Buttonwood
Optimism on earnings has driven share prices higher as financial markets are forward looking. Earnings are expected to slow down in 2022. In downturns companies could fire workers, but they tend to keep the business more stable and as sales rise or fall, then profits rise or fall more. This is especially true of cyclical businesses like oil, mining, etc to such an extent that changes in earnings forecasts are mainly driven by cyclical stocks. There is already evidence of a slowdown in China and global PMIs. Wages are the largest part of firms’ costs; given the labour market looks tight, these might go up. Firms could raise prices as a consequence but they tend to wait, the median duration of prices is eight to 11 months. Looks like profits will be squeezed.

Free exchange
The European Union established the cap-and-trade scheme in 2005 for pricing carbon emissions. Making polluting firms buy permits put them at a disadvantage internationally, the EU offered subsidies and free pollution permits to some of those affected. This is now coming to an end with a plan to replace them with a “carbon border-adjustment mechanism” (CBAM). Producers of aluminium, cement, fertilisers and steel will lose their subsidies, but importers will have to buy new pollution permits. This is actually a tariff to compensate for the fact that foreign firms may have no carbon price, or less of one than Europe. There will no doubt be “carbon leakage”, foreign firms may just direct their greenest exports to Europe, but it’s a start for carbon pricing. First of all they have to sell the idea at home, lawmakers in the European parliament are already calling for changes.