China and commodities
China’s heft in commodity markets can be seen in chart 1 below. For instance it consumes 55% of the world’s supply of coal. Coal and hydropower are two of its main sources of power. When they tried to curb coal’s use for environmental reasons they also had a drought at the same time, cutting its hydroelectric generation. They tried supplementing this with imports of liquefied natural gas and this caused ripple effects on the price around the world. China deems commodities as strategically important and will intervene at will. Also they have taken a longer term approach to keeping prices low, for instance they built aluminium smelters in the 2000s, at an estimated cost of $70bn but without it China’s infrastructure costs would have risen by an extra $1trn between 2000 and 2015. They are also financially sophisticated in the trading of commodities and have some of the largest commodity exchanges in the world, see chart 2. From January to June the ten most trade agricultural futures contracts were all Chinese, as were eight of the ten metals contracts and five of the top ten energy contracts. The make-up of their exchanges is different to Western ones, retail investors hold 85% of open positions compared to 15% in the developed world, they trade smaller lots and turn them, thereby quickly adding liquidity. Chinese authorities now want to make their benchmarks global. So far they’ve isolated themselves from international traders but this is changing. Two problems will arise for them: (i) commodity demand is shifting globally, i.e. more metals required to build wind turbines will see China eclipsed as their use of metals is expected to peak in the next few years; (ii) their commodity exchanges are tied into the state, making investors wary of the predictability of Chinese markets. 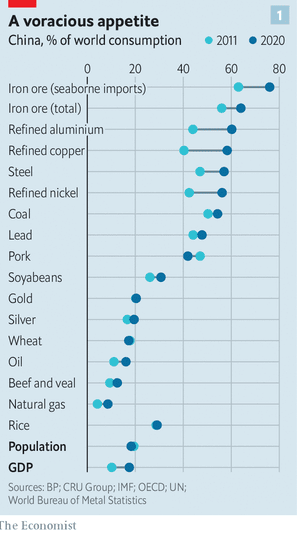 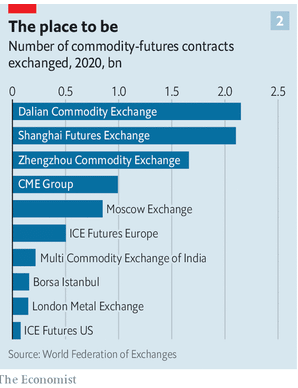 Investment in Germany
Germany needs €50bn a year for its climate obligations and digital infrastructure upgrade but the debt brake limits them to 0.35% of nominal GDP (€12bn). Ways round this are off-budget public companies such as Deutsche Bahn, but EU state aid rules limit this. They could make use of the temporary suspension of the debt brake to binge borrow. Another route is tweaking inputs to calculations of the “output gap”, the difference between GDP today and a measure of the economy’s potential. A coalition government was promised by the end of November. Complex schemes might be exactly what they need.

Inflation
Japan’s inflation is not rising despite what’s happening with the rest of the world, chart 1. Its down to entrenched expectations built up over decades and the weakness of their consumer recovery. The BOJ has tried its best, their assets were 103% of GDP before the pandemic and now they’re 134%, the Fed’s equivalent numbers are 19% and 36%. Japan’s new PM has promised a fiscal stimulus, worth an estimated 3.4% of GDP. 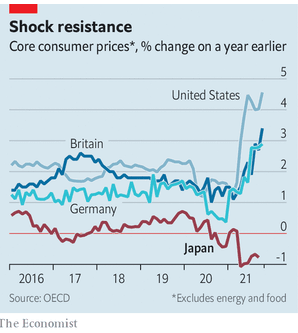 Buttonwood
Baillie Gifford oversees assets of £346bn in 12 trusts and 33 funds and Scottish Mortgage Investment Trust is considered its flagship. £1,000 invested in the trust ten years ago would be worth £11,600 today, compared to £3,800 for the FTSE All-World index. James Anderson who took control of the SMIT 21 years ago is responsible but will step aside in April. When he took over it held shares in hundreds of listed firms; now it invests in a few dozen public and private firms around the world, such as Alibaba, Amazon, Tencent and Tesla. The trust’s horizons were broadened and it bet on some unconventional businesses but its success is down to recognising trends early and sticking with them. Keeping its extraordinary record will be difficult, not least with demands for social responsibility but there is a well grounded succession plan and Tom Slater, Anderson’s replacement, has jointly managed SMIT since 2015.

House prices
House prices in rich countries are rising, fast, as are rents. America and Australia have seen 20% rises in the past 12 months. The pandemic made things worse as people want larger homes. Governments are trying to cool things down. Some policies target first time buyers (Spain), others deter foreign buyers (Canada), South Korea introduced 20 different regulations. None of these policies have really helped curb the price rises in affordable housing. Now authorities are targeting big landlords, for instance Spain’s new legislation imposes rent controls on landlords with more than ten properties.

Frequent-flyer schemes
American Airlines introduced the first frequent flyer programme 40 years ago, now the scheme is valued at $18-20bn while the airline’s market capitalisation is $12.9bn. First the programmes were aimed at loyalty. Now they’re sophisticated and airlines profit by selling miles to credit card firms. Debt backed by these schemes generally have a better credit rating than the airline. If there’s a rush to redeem air miles, companies can simply devalue them. However this will be a tricky balancing act for the airlines in order to preserve customer engagement and not upset securitisation arrangements.

Ethiopia’s growth model
Ethiopia, the second most populous country in Africa, saw its real GDP per person rise at an annual rate of 9.3% from 1999 to 2019. These gains are in danger as a year long war between the Ethiopian government and forces led by the Tigrayan People’s Liberation Front (TPLF) continues. In 1991 forces led by the TPLF overthrew a Marxist regime and started liberalising the economy. The first success came from increasing agricultural productivity. Then industry rose rapidly, mainly at small firms making food and beverage products. Manufacturing took a hold in the last ten years. Firms like H&M and Primark began buying from Ethiopian plants. Now all this is in danger and makes it plain that a state’s development rests on its ability to maintain order. 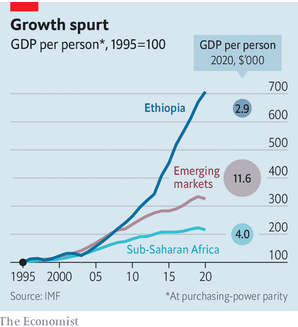 Free exchange
Janos Kornai was a Hungarian economist who died last month. He welcomed the Soviets as liberators and was an enthusiastic communist at the start. He then came to understand communist economics and what he called a “soft budget constraint”, firms do not fear losses unlike under capitalism. This led communist firms to indulge in “investment hunger”, i.e. too many resources. In his memoir he wrote “I would sooner live under the capitalist system than in the happiest barrack in the socialist camp”.