The Fed must be delighted. Their second hike in a quarter has been greeted as a dovish hike. This week at least 9 of them are giving speeches: will they pour oil on this becalmed water? Or will it be a case of carry on carrying, as it usually is in the (perceived) absence of event risks… Our favourite blind-pile-into-high-yield, the South African Rand, is at the highs of the year – in fact of about two years.

This is the disquieting fact about markets since central banks got unconventional: the status quo isn’t a flat line, it’s an upward slope. Just as equities always had a long bias, with money needing to be put to work, now bonds, commodities and carry currencies experience the same upward momentum in the absence of anything else going on. So events pass by, positions are shuffled, and then volatility is completely smashed – driving the daily wall of money into higher yielding assets. With negative interest rates out there, why wouldn’t this happen?

Ah but those negative interest rates will not be with us forever. In fact, the interest rate pile is fast shifting from those falling over themselves to cut, to those trying to erase the easing. And thus the Fed must indeed be delighted that their dot plot for the next two years would take them above one of the previous kings of carry, the Australians, without anyone noticing.

This is allowing those uber doves, the ECB, to sneak out their hawkish feathers unnoticed too. We are used to comments from hawks like Nowotny, who last week popped up to argue that the deposit rate could be raised before ending QE.

But now one of the doves, Italy’s Visco  has also said that the time between hiking rates and ending QE could be “shortened”.

The exit debate is clearly furiously afoot at the ECB. Maybe that explains Draghi’s almost exasperated attitude as the last press conference. He referred back to other statements so often that it’s clear he doesn’t want to stamp his voice on the official ECB communications yet.

Other developments over the weekend should also give carry-hunters pause for thought. For the first time in decades, the G20 couldn’t agree that “refraining from protectionism” was A Good Thing. We all know the elephant in the room is orange, and he wants bilateral trade deals as the only way to ensure his country gets its way. But this creates significant risks ahead for those who are in line for a deal and for those who are not. Not just the US: note that Merkel’s main response to her meeting with Trump was to emphasise the need to get the EU/Japan trade deal confirmed ASAP.

This is a paradigm shift from the shibboleth of the past two decades. Previously the equation ran: Globalisation good = trade up = EM growth = DM growth = commodities up BUT inflation down as new labour came onstream and technology made us more productive. Thus the Great Moderation. Now many of those forces are going into reverse. Does this mean growth down but inflation up?

Let’s keep climbing the wall of worry until the stagflation demons make themselves known. Oh, and while we are at it, let’s not forget the monetary policy divergence rankings are rearranging themselves too.

Tomorrow is going to be a long day. Its shadow already looms large and may cast far. Within 24 hours we get the Fed, the Dutch elections, the Swiss National Bank, the Norges Bank, the Bank of England, along with US inflation, US retail sales and UK employment data.

But when history looks back upon this day, there is really only one character who will make it so notable. One Caesar, or perhaps from the market’s perspective, one Brutus. Step forward and bootless kneel, Ms Janet Yellen!

Yes, the Fed should finally deliver their next rate hike and all the focus is on what they signal from this point forward. The Dots are back in vogue. The market is pricing just over 2.5 hikes by the end of the year; the median dot in December was 3 for the year and they’re just about to give us 1 of those 3. The big question is: Can they really claim they’ll do another 3 before the year is out?

The scepticism inherent in that question is strong, and with good reason. Ever since the dots were introduced, the Fed has failed to deliver. They were introduced in Jan 2012 alongside the forward guidance about keeping rates low until unemployment hit 6.5%. The market has consistently underpriced the Fed. Here’s the 2yr rate, with each horizontal line showing the median dot for 2 years from the date of the Fed meeting: 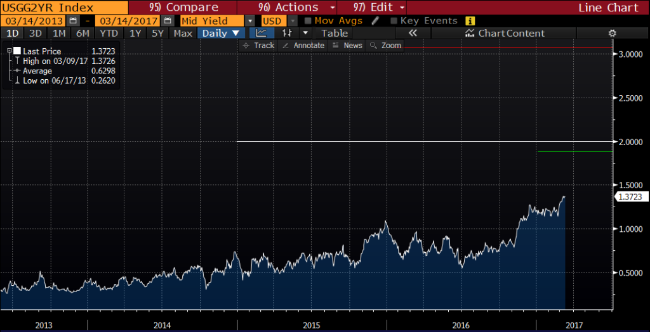 So in 2013, the median dot saw rates in 2 years’ time at 2% (white line), then in 2014 it was up above 3% (red line). In the most recent set of projections in December, the 2 year rate was expected to be around 2%. So, the market still underprices the Fed, but by less as the Fed has come down to meet the market. Some of the shift lower can be attributed to a new reality. After oil prices hit their precipitous decline at the end of 2014, the world’s central banks fell over themselves to keep things easy; and unimpressive global growth kept yield curves under control. “Secular stagnation” was all the rage.

This narrative is important to bear in mind as we head towards the Ides of March. “Secular Stagnation” is about to be sacrificed at the altar, because reflation is real, it’s here and it’s happening.  Chinese producer prices are now up almost 8% YoY – just 12 months ago they were in deflation, at -5.9%. That’s one heck of a rate of change. Commodities are moving higher, and even inflation is even managing to move higher in the uber-deflationary doomsayers Japan and Europe:

This was happening absent the Trump effect. But if he can get an infrastructure build through Congress, and jumpstart the animal spirits, well… there’s only one way this can go. Let’s not forget that optimism surveys are printing staggering new highs:

So, the world is changing. But markets can sometimes be slow to spot it. Particularly as central banks have been dictating the game for the past decade. They had to. As lenders of last resort, they were the only people able to keep the game going. But the baton has passed. They did their work. But it’s time for them to remind us of what we cannot see.

You might argue that the Fed have disappointed you one time too many. Yellen is the uber-dove isn’t she? Scarred for her tenure by the Taper Tantrum mishap that took place just months before she became the Chair.  Handed the poisoned chalice of exiting from unconventional monetary policy into one of the weakest recoveries the world has ever seen. Why wouldn’t she be cautious?

Ah, but the calculus has changed for her too. Before November 8th, she could be relatively happy that she was handling the poisoned chalice with aplomb, and that President Clinton would no doubt give her another 4 years to make sure the job was done. But then she woke up on November 9th and realised that President Trump, a vocal opponent of the Fed, would now determine her fate. She would only have 8 more meetings to set up her legacy. And perhaps even less than that, with 2 seats already vacant on the Fed for him to fill, plus the chance to fill another 3 in her final year. (NB: When the market looks at pricing 2018, it should really realise that 6 of the 7 member board will likely be completely different by then).

So, she has 8 meetings, but only 4 with press conferences and the Summary of Economic Projections. For some of those meetings, Trump supporters may be sitting across the table from her. So she had to act.

First, though, she had to see how the 100 days panned out. After about 40 days, Trump hadn’t stirred up a tweet-storm about the Fed. She saw her opportunity and went for it. In the first week of March, Fed speakers were falling over themselves to run to the hawkish side of the boat. Pricing of a hike in March, which had been assumed a relatively dull meeting until the Trump administration got their fiscal plans up and running, moved from ~25% to ~80% chance of a hike.

So this explains why the sudden rush. She had an opportunity and she took it. But it also provides insight into how the March meeting is likely to pan out. Yellen has got to signal a decent number of hikes ahead. Just think in a couple of years from now, if there is another financial crisis, Trump will be the first to point out that the blame lies with the failure of the Yellen Fed. That she deliberately sowed the seeds of the next crisis by keeping rates too low for too long. Sure, she will also be prey to risks that too much hawkishness now runs the economy down, but with stock markets at record highs and the data in pretty good shape, she can afford to take some of that heat. She can always dial it down in the run-up to the June meeting if required. We get a lot of data in the Summary of Economic Projections – keep an eye on the forecast for long-run rates. This has edged down from above 4% when they began to 2.9% now. Even if the dots remain the same, this could now move higher as she balances out the message.

In any case, it’s not the dots that are the only source of any hawkishness. Balance sheet reduction has to be the name of the game, given she was tasked with exiting from unconventional policy. This will naturally increase the effective interest rate. Her own exit has sped up her calculations of the Fed’s exit. On the Ides of March, the assassination of ‘lower for longer’ will be complete.