As we await Boris Johnson’s likely move into 10 Downing Street, some Conservative MPs have suggested they would force a General Election by voting down their own Government in a no confidence vote, all in an attempt to avoid a No-Deal scenario. Although the former mayor of London has promised to try and negotiate a deal with Brussels, Mr Johnson has confirmed that he would abide by the 31 October deadline ‘’do or die’’, keeping the possibility of a No Deal Brexit firmly on the table.

This stance has understandably panicked those who want to avoid falling over the cliff edge into No Deal by default. They feel their ultimate weapon to stop Boris on this course of action would be the threat of bringing down his government.

The introduction of the Fixed-term Parliaments Act (FTPA) in 2011 removed the sitting Prime Minister’s ability to call an election at a time of their choosing – it is now up to Parliament. Absent the option of repealing the act entirely by a simple majority, there are two ways in which an early election may be triggered: at least two-thirds of the Commons votes in favour (as happened under Theresa May in 2017) or by the passage of a motion that “This House has no confidence in Her Majesty’s Government”. If this motion were carried, a 14 day period would follow in which confidence in the government could be re-established, either in a newly formed alternative government or in the incumbent government; if that fails, a General Election is called.

The current Conservative government has a working Commons majority of just four, including the backing of the Democratic Unionists. This could soon be reduced still further by the by-election that has just been announced for Brecon and Radnorshire on 1st August. This was largely a Liberal Democrat seat until 2015, and they’re expected to regain it for two reasons: 1) the by-election was triggered by a recall petition over the incumbent Conservative MP due to an expenses scandal and 2) that same MP is standing once again as the Conservative candidate. That’s before we even look at the resurgence of the Liberal Democrats in the national polls.

The threat of bringing down the government is therefore becoming more credible, requiring only two Conservative MPs to defy the party whip in a No Confidence vote.

But the timetable is against the anti-No-Dealers. An election would need to be triggered well before the 31 October deadline, in order to give enough time for the 14-day period under the FTPA, as well as the compulsory 25 working-day campaigning period. A vote would therefore need to be held as soon as MPs return from their summer recess, at least before 10th September 2019. After that date the Conference season recess also kicks in (specific dates TBC). 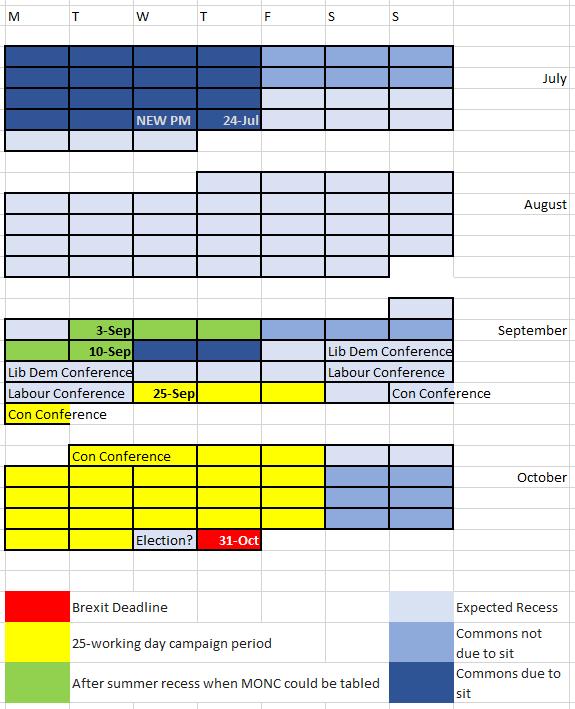 Instead, MPs could pass motions similar to the Cooper Bill, wrestling control of parliamentary time to mandate the Prime Minister to extend article 50 again. They could pass No Confidence motions with alternative phrasing, or with an explicit demand to ‘rule out no deal’, in an attempt to exert pressure on the PM. They could even pass a censure motion to hold Johnson’s pay to ransom.

Unfortunately, as Johnson-backer Dominic Raab has pointed out, these motions to stop a no deal Brexit would have ‘’zero legal effect’’. Only revoking Article 50 would remove the No Deal risk entirely. Even then that could be up for challenge from the European Court of Justice, whose recent ruling over revocation is that it must be “unequivocal and unconditional”.

If the No Confidence vote is passed, then surely that would force a change of direction?

Not if the Prime Minister doesn’t want it to. Under the rulings of the Fixed Term Parliament Act, he has two weapons up his sleeve constitutionally speaking:

Either of those courses of action would take a tremendous amount of chutzpah in the face of what would be a determinedly driven opposition. But the truth is that the opposition only have political pressure up their sleeves. This can work in their favour, but also against them. If they failed yet again to pass a Deal, then created chaos to force an election, it is not entirely clear they would be rewarded favourably by the electorate – nor that the voters would vote to Revoke rather than go for No Deal in an election that would effectively become a re-run of the Referendum.

Indeed, a ballsy Prime Minister might bypass the No Confidence vote altogether, calling for a dissolution of Parliament by the super-majority vote of two-thirds of the House, and daring the opposition to stop him. 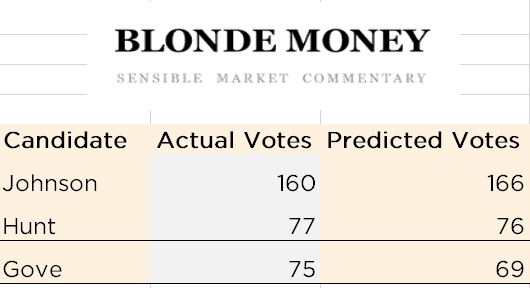 ….And finally, thank you to the BlondeMoney team of analysts who worked very hard to make some strong predictions in an extremely volatile political environment. If you’d like to know more about their analysis or work with our database, please let us know. 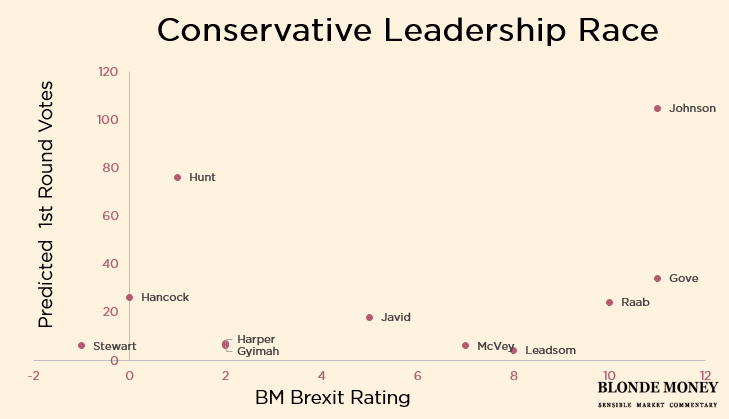 Ignore headline hysteria about a populist takeover of the EU. Rather, today’s European Parliament elections should prove to be yet another chapter in the story of how the public’s faith in institutions is ebbing away, leading to more volatile policy-making ahead.

Watch out for how many seats are won by:

We will find out:

The legacy blocs of the centre-right EPP and centre-left S&D can only be propped up if the Alliance of Liberals and Democrats for Europe is saved by Macron (courtesy of Open Europe): 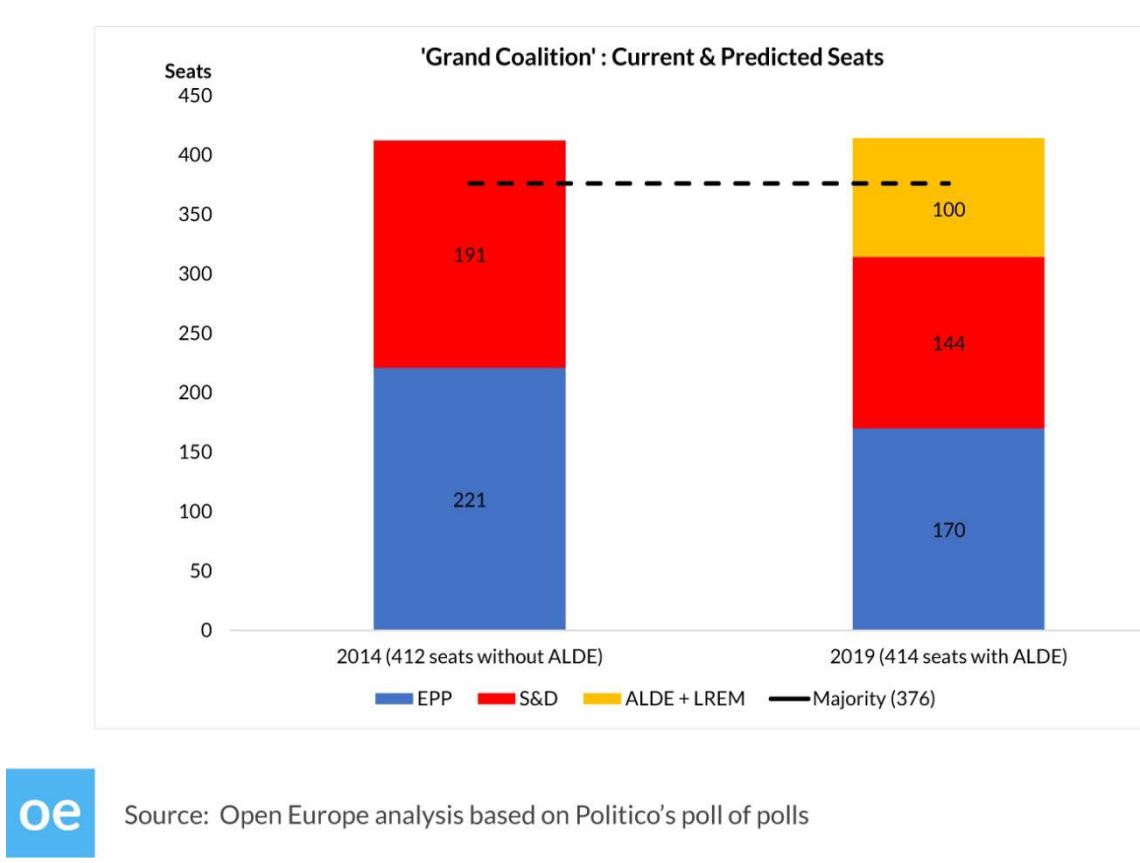 We warned in February over complacency that ‘the centrifugal forces spinning out towards No Brexit or No Deal are thought to provide a centripetal force to bring everyone back towards Theresa May’s Deal‘. The centrifugal forces will ultimately spiral out of control, whatever happens on Brexit. The pendulum has been set in motion.